Exodus 2.0 has now been released! You can download the new version now on the current releases page. I'm dedicating this release to my beautiful wife Judi, and my two boisterous little boys Justin and Aiden.

As promised, Exodus is now also open source. Check out the Source Code section for instructions on how to obtain and compile the source, and information on how you can contribute code changes to the project.

Note that you won't see a massive improvement in Mega Drive game compatibility with this version, as the focus has been on other areas, like performance, user interface, and the plugin API. There are still a number of games I know of that will greet you with a black screen for example when you try and load. This is due to the fact that although Exodus aims for cycle-level accuracy, it's not actually there yet, and there's a number of games that use a kind of wait loop against flags on the VDP that technically requires at the very least sub-opcode level timing emulation to pass. No other emulators have sub-opcode level timing emulation for their CPU cores, but they use incorrect timing on the VDP as well in order to make the tests pass.

The biggest thing that needs to be done for Exodus at this stage in order to improve Mega Drive compatibility is write Z80 and M68000 cores that emulate individual bus cycles, rather than emulating at an "opcode" level. For the M68000 at least, nobody seems to have ever done this, and a lot of information needs to be gathered on the hardware in order to determine the correct timing and order for each bus access within instructions. Emulating it properly will also require a major change to the bus system, which I currently have in the works. I was originally planning to have this bus change in Exodus 2.0, but I didn't want to delay the release any further. The bus system redesign, along with cycle-exact M68000 and Z80 cores, will now be my primary focus of development for the next major release. After this is complete, Exodus will have CPU emulation which is truly cycle-exact.

Despite the lack of perfection with the CPU cores at this stage though, Exodus is already much more accurate than other emulators at Mega Drive support for graphics and sound. Exodus has the most advanced YM2612 core ever written, as it was written entirely from scratch during my detailed reverse engineering of the YM2612 back in 2008.

In terms of the VDP, Exodus is the only Mega Drive emulator that has a cycle-exact VDP core, which allows it to emulate many quirks and tricks of the real hardware that other emulators can't, like Direct Color DMA. Aside from rendering accuracy, the VDP core is also fundamentally more accurate in handling basic communication from the CPU. Try this test ROM for example, which tests VDP port access: 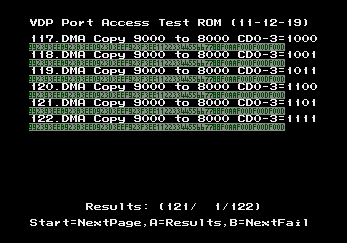 This test ROM isn't perfect, a couple of the tests fail intermittently on the real hardware, but it's pretty stable, and it's very thorough and brutal. Even Exodus doesn't get a perfect score here yet, it gets 121 out of 122. Most other Mega Drive emulators will only score around 20 or so. I'm hoping with Exodus now open source, other Mega Drive emulators which are still being maintained can use Exodus as a reference, and improve their accuracy on these kind of tests too.

Anyway, I hope some other people can make use of this. It's been a very long road to get to this point. Exodus was around 200,000 lines of code at the last count, and most areas of the code have gone through numerous revisions to get to where they are now. I daren't even estimate the number of hours that have gone into this project. I hope you find it interesting and useful.

EDIT: I forgot to say, if you want to check out the debugging features, you'll be best off using one of the pre-made workspaces. Select "File -> Load Workspace" from the main menu and select "Mega Drive Debugger.xml". That'll give you a pretty good debug environment ready to go.