Exodus 2.1 is now available in the downloads area. Note that you'll need to install the Visual C++ 2017 x64 runtime too if you don't have it, which is available there too. There's quite an impressive list of bugfixes in this release. Job EX-303 in particular fixes a crash that could occur if you had a joystick or gamepad connected, which affected a fair number of people in the previous release. There's also pretty good performance improvements. I measure around a 30% speed improvement overall from Exodus 2.0.1, which is pretty substantial. I've made the VDP plane viewer a but nicer by making the window resizable and making the plane region zoomable, which is nice, but I'm particularly proud of this little nugget: 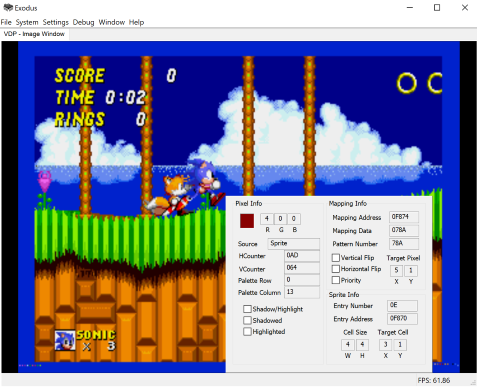 It's a pixel info dialog you can turn on via "Debug->Mega Drive->VDP->Debug Settings". Just float your cursor over any pixel, and it'll tell you exactly what caused it to appear there. This plays nice with layer removal, so you can peel off a layer at a time and see what's behind it if you want to, and where that pixel came from. It even works for CRAM writes during active scan. Being able to reverse the VDP render pipeline like this was relatively easy in Exodus because of how much info the VDP core holds on to, but it still took a bit of work to pull this off. Give it a spin and let me know what you think. It's great for diagnosing those mystery single line or pixel errors you can get while making something.

Here's the full list of user-facing changes in this release:

More in this category: « Return to active development Migration to GitHub »